By Otávio Almeida and Layon Lopes

The General Law on Personal Data Protection of Brazil (as known Lei Geral de Proteção de Dados or LGPD – Law No. 13.709/2018) is the norm that regulates the treatment of personal data. After eight years of proceedings, the Brazilian framework on data protection is born in a context of international efforts to have greater security on information and data privacy.

After the occurrence of several international scandals and the advance of social networks, the matter of data protection became relevant in the public debate – stressing that it is not a new matter, but there had never been so much talk about it.

The goal of the LGPD, as well as the legislations of other countries, tries to establish a new culture in the era of BigData, in which citizens have control over the treatment of their personal data.

Almost a year after the LGPD came into force, it is possible to indicate that the reality of the holders of personal data, as well as those who process data, whether from the public or private sector, are being strongly impacted by the need to adapt to the legislation.

Certainly, following the example of the European Union, sanctions to those who violate or improperly handle personal data will be strongly punished. Among differences and similarities, Brazil must follow several international practices, which it already does, however, following its own path, considering its unique social and business reality.

This text is intended to introduce the LGPD, drawing some comparisons with data protection practices already practiced around the world, in particular, the European legislation.

The international importance of legal frameworks for data protection:

The International Community, especially in the last decade, has promoted many data security policies, including a great characteristic of this movement was and still is the definition that one of the requirements for the establishment of commercial relations is that the players – in this case, the countries – are minimally adequate for this reality.

The economic block of the European Union is a great example of this, since after the enactment of the GDPR (General Data Protection Resolution) it was established the policy that member states and companies require their international partners to have adopted compliance and data security policies aiming to protect the interests of European citizens.

By market demand, companies are having to reinvent themselves and adapt to the privacy design required so not to lose competitiveness. And in Brazil it is no different.

In the European case, if the countries where the companies come from do not have specific laws on the issues, contracts with them should have binding corporate rules, which greatly increases bureaucracy.

This automatically encouraged many countries to speed up the enactment of their data privacy legislation in order not to lose competitiveness with their more mature rivals on the subject.

The confluence was such that the data privacy legislative process became a big wave, as can be seen in David Banisar’s new General Data Protection Laws map, where 118 of the 193 UN member countries already have data protection laws; and, 32 are in the process. 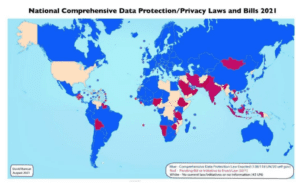 Now that you know there is a global demand for privacy and laws requiring compliance, let’s check out some legal tips if you want to be compliant with LGPD:

Make no mistake, this text does not have the deep mission of analyzing the international laws in comparison with the Brazilian ones, but it has the clear intention of passing the message that “be careful, although very similar, the data protection laws have particularities that cannot be ignored”.

Follow more of our publications. We will talk more about our General Data Protection Act and the influence it can have on your business. See you next time!

What are the most common dispute resolution methods for startups in Brazil?

The article will analyze the most common dispute resolution methods for startups in Brazil.

Software taxation in Brazil is an essential point for understanding the taxes involving software development.